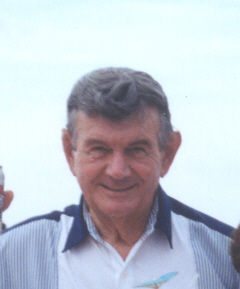 He was born August 10, 1924 in Ohio and moved to Punta Gorda in 1969
from North Miami Beach, Florida . He was a retired real estate salesman and was
one of the originators of the time share concept. He started in real estate in
Punta Gorda in 1969 as an on-site salesman for Punta Gorda Isles and over the years
was involved in many Punta Gorda real estate transactions. He was a former
Arthur Murray dance instructor and a veteran of World War II, U.S. Marine Corps
where he served as a Staff Sergeant. He was a member of Holy Trinity Greek
Orthodox Church of Port Charlotte and a former member and one of the founders
of the Annunciation Greek Orthodox Church of Fort Myers. He was a loving husband,
father, grand father, and great grand father who will missed by all.

To leave a condolence, you can first sign into Facebook or fill out the below form with your name and email. [fbl_login_button redirect="https://robersonfh.com/obituary/andrew-ponticos/?modal=light-candle" hide_if_logged="" size="medium" type="login_with" show_face="true"]
×