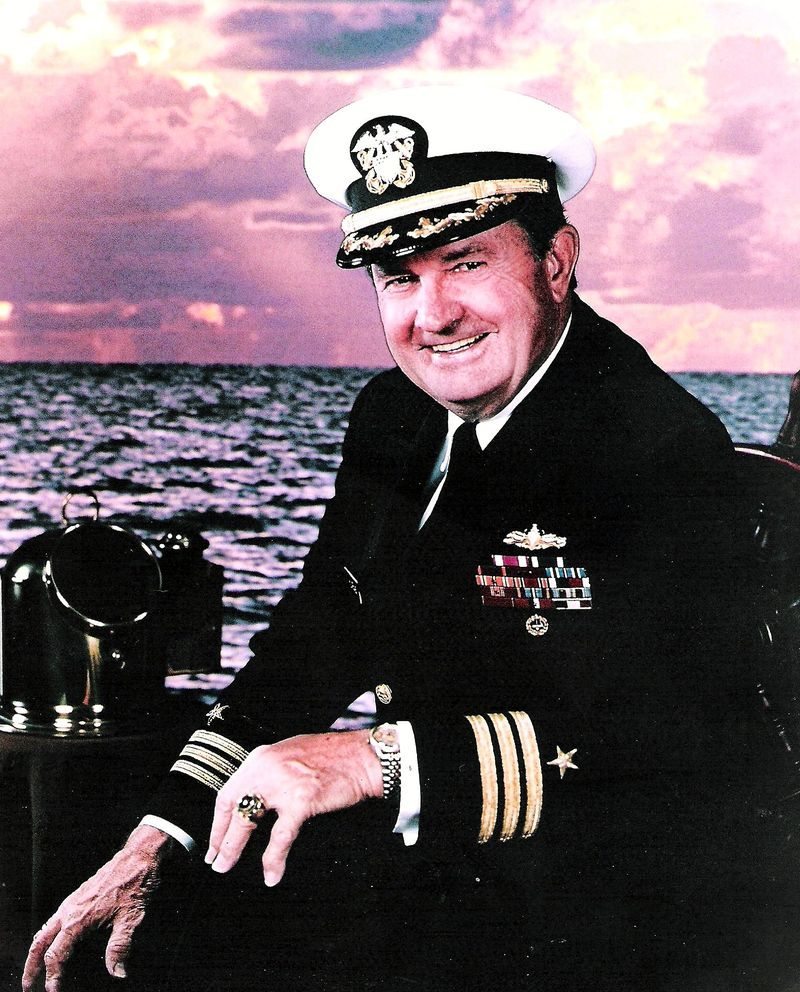 “Tony” was born a first generation American in Brooklyn, New York on July 15, 1925. His parents, Theophil Stanley and Hedwig (Bielen) Kuras emigrated from Poland in the early 1900’s. He is a graduate of Fordham University in New York where he also accomplished Master’s work. In September, 1943, at age 18, Tony joined the US Navy, serving with the SEABEES until 1946. He participated in several World War II Pacific campaigns, culminating in the 1945 invasion of Okinawa, where CBMU 617 was attached to Marine Air Group 31, Yontan Airstrip, Okinawa. Afterward, he briefly served in the Naval Reserve until his recall to active duty in 1952, during the Korean crisis. Tony remained on active duty until 1978. Tony was a Mustang. He served as an enlisted man for 14 years, six years as Warrant and Chief Warrant Officer, and 15 years as a Commissioned Officer, retiring as a Commander, with 35 years of dedicated Naval service.

Highlights of Tony’s career include qualifying on the carrier, USS WASP (CVS-18), as officer of the deck (underway); where he served as an interpreter during the 1962 Cuban Missile Crisis, as he held State Department level credentials in the Polish language. In 1963 Tony participated in the recovery of a Mercury space capsule. A later assignment was as First Lieutenant aboard the USS Mississinewa (AO-144). During this assignment he was the acting Executive Officer and Lay Catholic Chaplain, conducting services on deck. Following were assignments as Administrative Officer, Naval Communications Station, Washington, D.C.; Commandant, Third Naval District (DNQ-53), District, New York Program Officer at Reserve supplement, Commandant Third Naval District. He served as Commanding Officer at the Naval and Marine Corps Reserve Center in New Rochelle, New York, and Deputy Commander/Chief of Staff, REDCOM TWO. Next, Tony was assigned director of manpower for OP-SAIL and International Naval Review, the tall ship celebration during the nation’s bi-centennial in New York Harbor in 1976. The sailing ships were reviewed by President Gerald Ford when he rang the ship’s bell on the USS Forrestal (CVA-59) to commemorate our nation’s 200th birthday. Tony’s final assignment before retiring was Director of Manpower and Training at the Readiness Command Region 8 at Naval Air Station, Jacksonville, Florida. During his career, Tony received the Surface Warfare Designator, Shore Command Pin, Meritorious Service Medal, and Navy Commendation Medal along with twelve other awards and medals. Tony was also decorated in Malta, on behalf of the Queen of England, for his community service deeds.

After retiring from the US Navy, Tony and his family settled in Port Charlotte, Florida where he was first employed as Assistant Vice President of First Federal Savings and Loan. He later served the community for 11 years as the Charlotte County Veterans Service Officer. Additional community service included Parish Council, School Board and Eucharistic Minister for St. Charles Borromeo Catholic Church. Tony was a member of the Board of Directors for USS WASP Association and STAR (Special Training and Rehabilitation). He is a life member of the American Legion and many military organizations, as well as the Elks. He led Charlotte County’s initial effort to achieve a Veterans Nursing Home. He was an original member of the Charter Board of Directors for the Doug Jacobson’s Resident’s Fund, until his health prohibited continued participation. A tree and bronze marker were placed there in his honor by the Daughters of the American Revolution in recognition of his service to Veterans.

Tony is survived by his beloved wife, Diane Skidmore Kuras, of Lake Suzy; two daughters, Linda of Lake Suzy, and Laura, of Cape Coral. Tony’s grandsons are Anthony, a USMC Sergeant, stationed at Camp Pendleton, California, and Patrick of Peoria, Illinois, both of whom will serve as pall-bearers. He also has three great-grandchildren, nieces and a nephew. He was predeceased by his parents, and sister, Josephine.

Tony was a courageous, brilliant, and benevolent man, generous with his love, compassion, and indomitable spirit. He had a unique and eloquent way of touching the hearts of everyone he met, teaching kindness and service to others through his words, and example by the life he led. His smile and laughter were a gift to all who knew him, and he will be missed tremendously. Acts of kindness to inspire and serve others, as a tribute to Tony’s life time of goodwill, would be sincerely appreciated by his family.

Mass of Christian Burial will be at 11:00 AM on Monday, March 5, 2012 at St. Charles Borromeo Catholic Church in Port Charlotte, followed by a private family gathering for Tony’s interment with Military Honors at the Sarasota National Veterans Cemetery.

In lieu of flowers donations may be made to the Michael J. Fox Foundation for Parkinson’s Research. ATTN: Tribute Gifts, Church Street Station, P.O. Box 780, New York, NY 10008-0780. For more information, email donations@michaeljfox.org or call 1-800-708-7644. Friends may visit online at www.robersonfh.com to sign the memory book and extend condolences to the family. Arrangements are by Roberson Funeral Home Port Charlotte Chapel

To leave a condolence, you can first sign into Facebook or fill out the below form with your name and email. [fbl_login_button redirect="https://robersonfh.com/obituary/anthony-kuras/?modal=light-candle" hide_if_logged="" size="medium" type="login_with" show_face="true"]
×