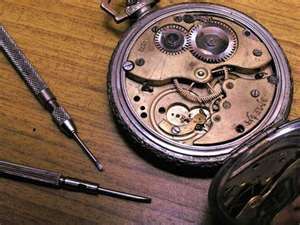 Born April 10, 1923 in Newark, New Jersey, Tony moved from his long time home of Fair Lawn, New Jersey, retiring from a long career as a watchmaker, and moved to Port Charlotte in 1986. He was a member of the National Association of Watch Clock Collectors, Inc., and attended St. Charles Borromeo Catholic Church in Port Charlotte. Anthony was a veteran of World War II, U.S. Army.

He is survived by his loving daughters, Barbara Ann Johnson of Punta Gorda, FL, and Johanna A. Ryan of Poughkeepsie, NY, two grandchildren, and one great grandchild. Tony was preceded in death by his beloved wife, Johanna Adina Montefusco in January of 2004.

Tony so enjoyed his teaching of watch and clock repair, he would be proud to know this education will be continued in his name with a memorial donation in his name to the NAWCC, Inc., care of Johanna Ryan at 42 Dutchess Hill Rd., Poughkeepsie, New York 12601.

To leave a condolence, you can first sign into Facebook or fill out the below form with your name and email. [fbl_login_button redirect="https://robersonfh.com/obituary/anthony-montefusco/?modal=light-candle" hide_if_logged="" size="medium" type="login_with" show_face="true"]
×