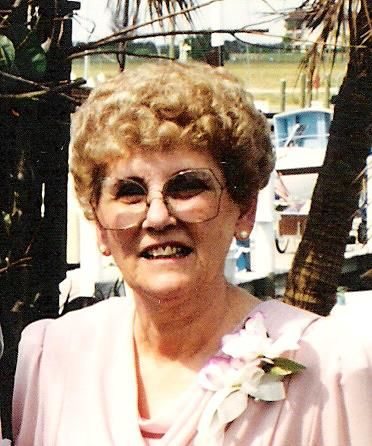 She was born in Blue Springs, Nebraska July 16, 1925 to the late John Lewis and Phamy Jane (nee – Bevan) Fralin. Betty graduated from then Blue Springs High School in 1942 at the top of her class. During World War II she was employed by Store Kraft Manufacturing Company, Beatrice, Nebraska. During this period she served as a member of the Nebraska Civil Air Patrol. Betty was a graduate of the Central Airline School.

On the 23rd of May 1946 she met her future husband on a blind date. It was love at first sight for both, and they were married on the 26th December 1948 at her parent’s home in Beatrice, Nebraska. Shortly after their marriage they moved to Inglewood, California where they lived until her husband’s graduation from the Art Center College of Design in Los Angeles. She was employed as secretary to the General Traffic Manager of Western Air Lines in Los Angeles. After her husband was hired as an automobile designer by General Motors Design Staff in Detroit, Michigan, she was employed as a legal secretary with the General Motors Legal Department.

She was active with the Brownie and Girl Scouts, and other activities of her daughter Kara. She was a participant in two family hobbies, genealogy and the collection and restoration of antique automobiles. She enjoyed traveling, and with her husband, made many trips to Europe and the British Isles, living in Germany in 1963 and 1965. She was a beautiful, exceptionally gifted, gracious lady in every way. She will be greatly missed by all who knew her, most of all by her husband, and daughter whose love for her will never die.

She is survived by her loving husband of 65 years, Duane L. Bohnstedt, their only child, Kara Lyn Bohnstedt Yearty, also of Punta Gorda; a sister, Donna Schaefer and brother, Robert Fralin, both of Lincoln, NE, and extended family members.

A private committal for Betty will be held by the Bohnstedt family at Restlawn Memorial Gardens’ cemetery in Port Charlotte, Florida.

In lieu of flowers, memorials may be made in Betty’s name to the Tidewell Hospice Philanthropy Department, 5955 Rand Blvd, Sarasota, Florida 34238, or the charity of your choice.

“The family wishes to thank the staffs at Fawcett Memorial Hospital and Tidewell Hospice House of Port Charlotte for the wonderful care given to Betty.”

To leave a condolence, you can first sign into Facebook or fill out the below form with your name and email. [fbl_login_button redirect="https://robersonfh.com/obituary/betty-bohnstedt/?modal=light-candle" hide_if_logged="" size="medium" type="login_with" show_face="true"]
×