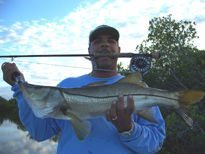 Angel was born November 24, 1975 in Gary, Indiana and moved to Port Charlotte in 2000 to pursue his lifelong dream of becoming a professional fisherman. His passion for fishing was reflected in his daily life. He was a member of numerous fishing organizations as well as a volunteer for many associations and charities here in Charlotte County. He contributed photography for Waterlife Magazine; he was a volunteer captain for the kid’s cup and Don Ball’s Fishing Academy, a guest speaker for Coastal Conservation Association as well as other numerous organizations. He was a proud Pro-Staff member for Penn and Pure Fishing, and was always found at Fishin’ Franks on his days off. Angel went from picking shrimp at Fishin’ Franks to fulfilling his dream as a professional charter captain, a mentor and teacher for all who would listen. He was the owner and operator of Vicious Strikes Charters. Angel was a huge part of Charlotte County’s fishing community and will be missed by many.

He is survived by his son, Angel D. Little Angel Torres; his wife, Kimberly Osborne-Torres; Children, Cody, Bennon and Phantasia Osborne; his parents, Carmen & Victor Torres and his brothers, Carlos and Edwardo Torres.

To leave a condolence, you can first sign into Facebook or fill out the below form with your name and email. [fbl_login_button redirect="https://robersonfh.com/obituary/capt-torres/?modal=light-candle" hide_if_logged="" size="medium" type="login_with" show_face="true"]
×