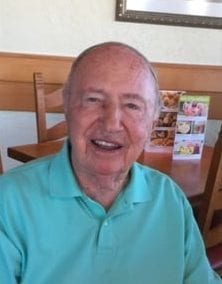 Charlton Robert Christman, 92, of Venice, Florida and formerly of Port Charlotte, Florida died Friday, December 18, 2020 at Manorcare Health Services in Venice.
Charlton was born April 21, 1928 in Stroudsburg, Pennsylvania to the late Fred and Ann (Smith) Christman.  He was a U.S. Navy veteran of the Korean War where he served as a Hospital Corpsman. Charlton was a retired department manager for Sears, Roebuck and Co. (Sears) and during his retirement years worked as a greeter at the Venice Wal-Mart for over 20 years. He was a member of the Port Charlotte United Methodist Church, Circus Historical Inc., and the Circus Model Builders International.
Charlton has no immediate survivors, but will be missed by his many friends and neighbors who loved and cared for him. He was preceded in death by his wife, Joyce C. Christman who died in 2007.
Graveside services and interment with military honors a U.S. Navy Honor Guard will be held Wednesday 2:00 PM, January 20, 2021 at Restlawn Memorial Gardens, 1380 Forrest Nelson Blvd., Port Charlotte, FL 33952. Rev. Denvil Farley of the Port Charlotte United Methodist Church will officiate.
Memorial contributions in his memory may be made to the Port Charlotte United Methodist Church, 21075 Quesada Ave., Port Charlotte, FL 33952 or to a favorite charity.
Friends may visit online at www.robersonfh.com to extend condolences the family.  Arrangements by Roberson Funeral Home & Crematory Port Charlotte Chapel.

To leave a condolence, you can first sign into Facebook or fill out the below form with your name and email. [fbl_login_button redirect="https://robersonfh.com/obituary/charlton-robert-christman/?modal=light-candle" hide_if_logged="" size="medium" type="login_with" show_face="true"]
×