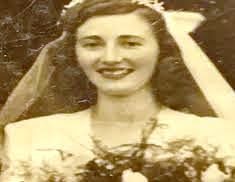 She was born on December 13th, 1920 to Henry James Williams and Florence Adcock Williams of East Haven, Connecticut. She had an older brother, James, who predeceased her by three years. Her father was head accountant for the Connecticut Trolley Company, and her mother a champion, long distance swimmer. She attended East Haven High School, where she participated in school musicals as a dancer and singer and distinguished herself academically. Following graduation, Emily went to work for Bell Telephone as an elevator operator, and over the years worked her way up to supervising engineer. Among other contributions, she oversaw the modernization of the Bell Telephone communications infrastructure for the state of Connecticut. She married Elwood Carl Pieper, and they made their home in Norwalk, Connecticut, where she assisted him in providing a positive outlet for local youth in their model railroading club, amassing what was then the world’s largest private collection of Standard gauge model trains. Holidays at their home were always a highlight for the children in her extended family with excellent food, varied options for entertainment, and loving hospitality. Emily was baptized and raised in the Episcopal Church and became an active, lifelong member of the Lutheran Church after marriage.

Emily and her husband retired to Saint John, United States Virgin Islands, where they entertained interesting visitors from around the world at the home they designed and built next to Haul Over Bay, a onetime famous haven for the Brethren of the Coast, known today as the pirates of the Caribbean. Emily pursued her passion for raising orchids and the study of local flora and fauna. She was active in the island church, and together with her husband was known for providing needy local families with water during the periodic droughts suffered on the island. Coming from a family of swimmers, she enjoyed frequent snorkeling sojourns among the coral reefs and had many adventures, including a friendship with a school of dolphins. Eventually, Emily and Carl moved to Punta Gorda, Florida, where she continued to be active in the Lutheran Church. She pursued her interests in gardening and swimming well into her 94th year. Emily was known by friends and family alike as a sympathetic and discerning listener, a person of high moral character, and one that would only speak positively and graciously of others.

She is survived by her nephews and nieces, Charles Williams of Westbrook, Connecticut; her grand-nephew Morgan Williams; Sandra (Don) Langlois; Gail Pederstuen and Beth Lubenow of CT; Karl (Marty) Pieper of MA; Scott (Marina) Pederstuen of WA; Wayne Lubenow of CA; her cousin, Kitty Woodward of Durham, CT, and the Adcocks of Colchester, England. She will be greatly missed.

Memorial services celebrating Emily’s life will be held Saturday 11:00 AM, January 16, 2016 at the Lutheran Church of the Cross, 2300 Luther Rd., Port Charlotte, FL 33983. Memorial contributions may be made to the church. Friends may visit online at www.robersonfh.com to extend condolences to the family. Arrangements by Roberson Funeral Home & Crematory Punta Gorda Chapel.

To leave a condolence, you can first sign into Facebook or fill out the below form with your name and email. [fbl_login_button redirect="https://robersonfh.com/obituary/emily-w-pieper/?modal=light-candle" hide_if_logged="" size="medium" type="login_with" show_face="true"]
×