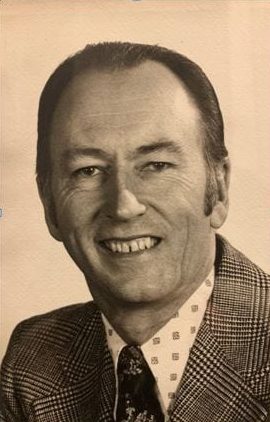 A Celebration of Life service will be held for Dan on Saturday, May 22, 2021, 3 pm at Church of the Good Shepherd in Punta Gorda, Florida.  It will be officiated by Fr. Roy Tuff.

Daniel “Dan” Griswold, 92, passed away peacefully April 26, 2021 in Port Charlotte, Florida.
Dan was born on April 13, 1929 in Phoenix, Arizona, one of two children of the late “Fritz” and Mary Griswold.  He met his future wife Linda at Phoenix High School and they married while attending the University of Arizona in Tucson.  After graduation, they moved to Dayton, Ohio (Wright Patterson Air Force Base), finally settling in St. Joseph, Michigan where they raised their three children.
In 2005 after retirement Dan and Linda moved from Michigan to Wisconsin where they lived for 10 years, dividing their time between Sheboygan Falls, Wisconsin and Dauphin Island, Alabama with many additional trips to the west coast and all points between.  More recently they lived at South Port Square in sunny Port Charlotte, Florida, where family visited frequently.  Linda passed away in 2019.
Dan was a devoted father, family provider and avid fisherman.  He served our nation in the Air Force and flew a desk designing brakes for the F-4 Phantom fighter jet during the Korean War.  He and Linda then relocated to Michigan where Dan worked for Auto Specialties Mfg. Co. (AUSCO) for his entire career from plant manager (aircraft brakes) to Vice President of Engineering and Sales.  Dan served his community as United Way Chairman and the YMCA Building Campaign Chairman coordinating a new facility from donations through the opening ceremony.  In between Dan fished in the St. Joseph River and Lake Michigan.  The family camped (and Dan fished) during vacations in northern Michigan.  Dan and Linda spent 25 of their retirement years RV’ing all over North America visiting family and 7 times to Alaska.  Some good fishing there too.
Dan and Linda are survived by daughter Pamela (John) Zechlinski of Elkhart Lake WI; son Dan (Alice) Griswold of Dubuque IA; daughter Susan Mamer of Dana Point CA; 6 grandchildren and 13 great grandchildren.
A Celebration of Life service will be held for Dan on Saturday, May 22, 2021, 3 pm at Church of the Good Shepherd in Punta Gorda, Florida.  It will be officiated by Fr. Roy Tuff.  The family would like to thank the staff at South Port Square for their loving care of Dan.
In lieu of flowers donations are suggested in Dan’s name to the Animal Welfare League of Charlotte County, 3519 Drance St. Port Charlotte, FL 33980.
Friends may visit online at www.robersonfh.com to extend condolences to the family.  Arrangements are by Roberson Funeral Homes & Crematory, Punta Gorda Chapel.

To leave a condolence, you can first sign into Facebook or fill out the below form with your name and email. [fbl_login_button redirect="https://robersonfh.com/obituary/f-daniel-griswold/?modal=light-candle" hide_if_logged="" size="medium" type="login_with" show_face="true"]
×

A Celebration of Life service will be held for Dan on Saturday, May 22, 2021, 3 pm at Church of the Good Shepherd in Punta Gorda, Florida.  It will be officiated by Fr. Roy Tuff.