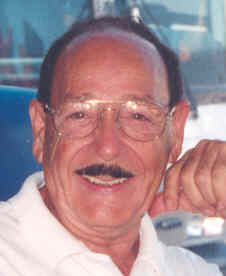 Born January 7, 1927 in Providence, Rhode Island, Frank, a veteran of World War II, United States Navy and retired grocery store manager, moved to this area from Providence, Rhode Island in 1991. He worked for Kingsway Country Club for many years and has been an active member of San Antonio Catholic Church, Port Charlotte, 4th Degree Knight, Knights of Columbus Council #14256, B.P.O. Elks, and Loyal Order of Moose Lodge #2121 of Port Charlotte.

He is survived by his beloved fiancé Carmella Tarantino of Deep Creek, a sister Genevieve Pacheco and brother Herbert Azevedo, both of RI, and several nieces and nephews.

To leave a condolence, you can first sign into Facebook or fill out the below form with your name and email. [fbl_login_button redirect="https://robersonfh.com/obituary/frank-azevedo/?modal=light-candle" hide_if_logged="" size="medium" type="login_with" show_face="true"]
×