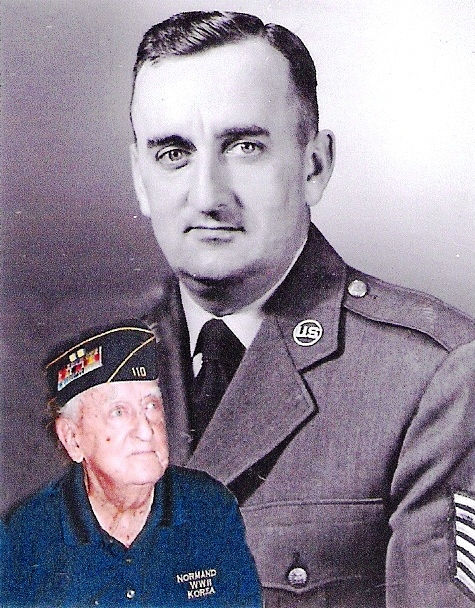 He was born in Palmer, Massachusetts to the late John and Antonina Marusinski and attended local schools. He played base ball with a local team where he was known as Shure Hit Marusinski. Frank enlisted in the U.S. Army on Friday, Feb. 13, 1942. He was part of the D Day’s Utah beach landing and was promoted to Staff Sergeant in June of 1943. He served in General Patton’s 3rd. Army, Headquarters Company, through all its campaigns. Frank re-enlisted in the Army Air Force in 1945 and was part of the Berlin Airlift effort while at Westover AFB, Massachusetts, he was promoted to Master Sergeant in 1956. While stationed at Westover Frank married Noella Alix of Holyoke. The Air Force Band honored the couple by playing at their reception. They were married for 65 years. Noella passed away in 2013. Frank was transferred to Kadena AFB Okinawa Frank assisted in the air operations with the 19th Bombardment Group during the Korean War. He attended the Strategic Air Command NCO Academy. Then transferred to Tachekawa AFB Japan as part of the occupation force. While there he was instrumental in his squadron adopting an orphanage and provided for their needs. Frank retired as 1st Sergeant of 4108th Maintenance and Refueling Squadron in 1962. The Marusinskis then moved to Port Charlotte. Frank joined the U.S. Post Office in Port Charlotte from which he retired in 1984. Frank served in the following:

Frank was an avid traveler and golfer, a founding member of Kings Way Country Club. A member of the American Legion Post 110 in Port Charlotte for 56 years, the Port Charlotte Moose and the AMVETS Post 312. He was a passionate supporter of The Boston Redsox and the New England Patriots.

The family thanks the folks at the Punta Gorda Elks for welcoming their uncle with such love and affection. Also his friends at The Lion’s Den Restaurant Port Charlotte, who always had a smile and a cheerful word, and his friends and staff at The Springs of South Biscayne thank you. Special thanks to the Tidewell Hospice staff for their compassionate, caring help through our difficult journey.

To leave a condolence, you can first sign into Facebook or fill out the below form with your name and email. [fbl_login_button redirect="https://robersonfh.com/obituary/frank-s-marusinski/?modal=light-candle" hide_if_logged="" size="medium" type="login_with" show_face="true"]
×