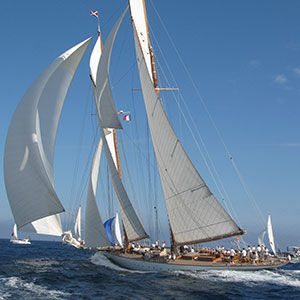 Born November 27, 1940 in Summit, New Jersey, Jim and his wife Marjorie B. (nee – Bonner) McTernan moved to Punta Gorda from Pitts Town, New Jersey in 2001 shortly after 9-11. A retired Sales Representative for the Steelcase Company in Philadelphia, PA, Jim a respected dog breeder and fancier who was well known around the Dog Show circuit, was a member of the American Kennel Club, the Kennel Club of Philadelphia, the Montgomery County Kennel Club, Inc., and enjoyed ties to the Kennel Club of the United Kingdom. Jim enjoyed golfing, long distance bike riding, and was an avid sailor.

He is survived by his wife nearly 50 years, Marjorie; a brother-in-law, Brendan Bonner of Miami Beach, FL, sister-in-law and brother-in-law, Anne and Robert Ramaglia of Jacksonville, FL; three nephews, Christopher Michael Ramaglia, Andrew Patrick Ramaglia, and Sean McTernan; and one niece, Stacie McTernan. James was preceded in death by his parents, Dorothy and Henry, and a brother, Henry McTernan, Jr.

Memorial services celebrating Jim’s life will be held at a later date. Memorial bequests in Jim’s name may be made to the American Cancer Society, P.O. Box 22718 Oklahoma City, Oklahoma, 73123-1718, or click link to left.

To leave a condolence, you can first sign into Facebook or fill out the below form with your name and email. [fbl_login_button redirect="https://robersonfh.com/obituary/james-mcternan/?modal=light-candle" hide_if_logged="" size="medium" type="login_with" show_face="true"]
×