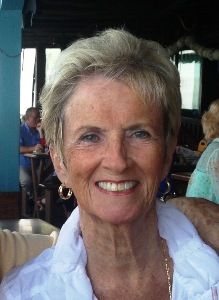 She is survived by her sister and brother-in-law, Anne and Robert Ramaglia of Jacksonville, FL, and brother Brendan Bonner of Miami Beach, FL; three nephews, Christopher Michael Ramaglia, Andrew Patrick Ramaglia, and Sean McTernan; and one niece, Stacie McTernan. In addition to her parents, Marjorie was preceded in death by her beloved husband of nearly 50 years, Jim, on September 10, 2014.

A Memorial Mass for Marjorie and Jim, will be celebrated at 11:00 a.m. Thursday, January 22, 2015 at Sacred Heart Catholic Church in Punta Gorda. Committal will be held in New Jersey at a later date.

In lieu of flowers, memorial donations in Marjorie’s name are suggested to Hope Hospice at 9470 HealthPark Circle, Fort Myers, Florida 33908.

To leave a condolence, you can first sign into Facebook or fill out the below form with your name and email. [fbl_login_button redirect="https://robersonfh.com/obituary/marjorie-mcternan/?modal=light-candle" hide_if_logged="" size="medium" type="login_with" show_face="true"]
×