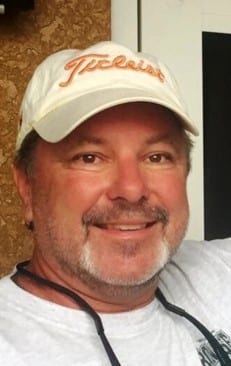 Michael Thomas Fenn, 54, of Punta Gorda, Florida passed away this past Monday, January 7, 2019, at Fawcett memorial Hospital in neighboring Port Charlotte, Florida, following a sudden and brief battle with cancer.

Michael was born to Orman William Fenn, Jr., and the late Lucille Adrienne Fenn, in February of 1964, in Lancaster, Pennsylvania. The Fenn family moved to High Point, North Carolina in 1970, where Michael and his siblings grew up. Following graduation from High School, Michael attended Ferrum College in Ferrum, Virginia, and began a career in the furniture manufacturing industry, as a Manufactures Sales Representative. He retired early, and moved to South Florida, eventually moving to Punta Gorda in March of 2017, with his wife Allison. Michael had a love of cars, which made him a natural fan of NASCAR; also, of motorcycles, and on any given sunny day you could find him riding his Victory bike; or boating the open waters under the Florida Sun.

A Memorial service celebrating Michael’s life will be held 10 a.m. on Saturday, January 19, 2019, at St. Mary’s Episcopal Church, at 108 W. Farriss Ave, in High Point, NC 27262. Another service honoring Michael will be held in Punta Gorda at a later date, time and location to be announced.

To leave a condolence, you can first sign into Facebook or fill out the below form with your name and email. [fbl_login_button redirect="https://robersonfh.com/obituary/michael-thomas-fenn/?modal=light-candle" hide_if_logged="" size="medium" type="login_with" show_face="true"]
×