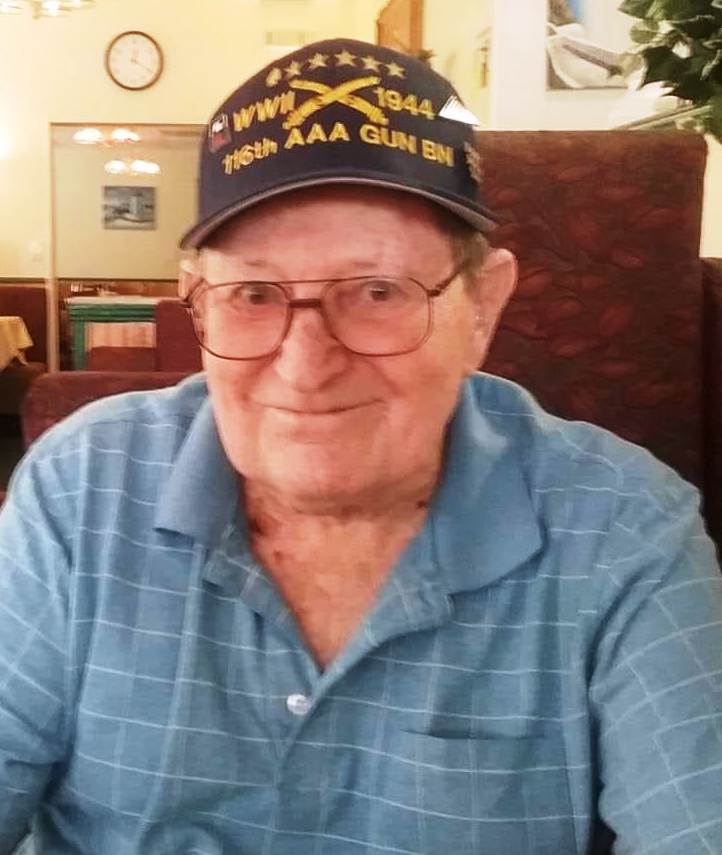 Inurnment will be held by the family at a later date in New Jersey.

Nathan George Slater, 96, of Port Charlotte, Florida passed away on Thursday, December 24, 2020 in Port Charlotte, Florida.
Known as George, he was born on December 18, 1924 in Prospect Park, New Jersey. He was the fifth of 10 children born to Aaron and Ella Jane Slater. In March of 1943, George was drafted into the U.S. Army. He served in the 116th Anti Aircraft Artillery Gun Battalion Mobile of the First Army’s VII Corps as a gun loader. During his 28 months in the European Theater, George participated in Exercise Tiger and the Normandy, Northern France, Ardennes, Rhineland, and Central Europe campaigns. He landed on Utah Beach on June 7, 1944 and engaged the Luftwaffe and Nazi tank divisions numerous times in Northern France that summer, including the Battle of Saint-Lo. His battalion protected the skies of Paris in the days immediately following the Liberation of Paris. During the Battle of the Bulge, December 1944, he defended the crossroads at Belle Croix Jalhay, Belgium, from a large German assault known as Operation Stosser. In early April of 1944, he participated in the liberation of the Nordhausen concentration camp in Germany. After the war, George married Lorainne Dodd. They settled in West Milford, New Jersey, and had three children in the immediate years following the war. George worked in the family well drilling business, Slater Well Drilling. He drilled water wells throughout northern New Jersey and southern New York for decades. In 1986, he and Lorainne retired in Port Charlotte, Florida, where they spent their time enjoying the mild winter climate and travelling back up north to visit family during the summers. George was well known for his great sense of humor, his fondness of singing, and his love of family.
He is survived by his daughter, Joyce A., grandchildren, Scott, Chris, Suzanne, Melissa, Laurie, Danielle, Glenn Jr., Shane, Sara, Samantha, and Charlotte, 21 great grandchildren, and many, many nieces and nephews. George was preceded in death by his wife, Lorraine G. Slater, his two sons, Kenny and Glenn Slater, Sr., and his brothers, Robby, Aaron, Roy, Russell, Kenny R., Stanley, and his sisters, Ella Mae, Lorraine, and Joyce.
Inurnment will be held by the family at a later date in New Jersey.
Friends may visit online at www.robersonfh.com to extend condolences to the family. Arrangements are by Roberson Funeral Home & Crematory Port Charlotte Chapel.

To leave a condolence, you can first sign into Facebook or fill out the below form with your name and email. [fbl_login_button redirect="https://robersonfh.com/obituary/nathan-george-slater/?modal=light-candle" hide_if_logged="" size="medium" type="login_with" show_face="true"]
×

Inurnment will be held by the family at a later date in New Jersey.