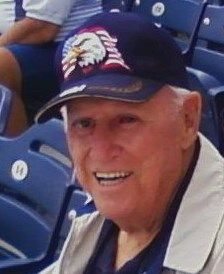 Powell A. Fraser, 89, of Port Charlotte, Florida passed away Thursday, February 26, 2015 at Douglas T. Jacobson State Veterans Nursing Home in Port Charlotte. He was born November 7, 1925 in Dracut, Massachusetts and retired to Port Charlotte in June of 1988.

Mr. Fraser was a retired police officer from Lowell, MA. He was the son of the late Arthur A. and Frances K. (Powell) Fraser, and the husband of his late & beloved wife, Louise A. (Gusmini Guarnieri) Fraser. He served in the US Navy serving in WW II and Korean War as an aviation radioman and combat air crewman. He was awarded the Navy “Air Medal and Gold Star” in lieu of the second air medal and other commendations. He was a life member in the following organizations all located in Port Charlotte: Knights of Columbus, Council #11483, Disabled American Veterans Foreign Wars, Chapter 82, Veteran’s of Foreign War, Post 5690, American Legion, Post #110. He was also a member of the Massachusetts Police Association and the International Brotherhood of Police Officers. Powell was a wonderful man who enjoyed life to the fullest. He was an outstanding brother, uncle, great uncle, great great uncle and friend and will forever be missed by all who loved and knew him.

To leave a condolence, you can first sign into Facebook or fill out the below form with your name and email. [fbl_login_button redirect="https://robersonfh.com/obituary/powell-fraser/?modal=light-candle" hide_if_logged="" size="medium" type="login_with" show_face="true"]
×