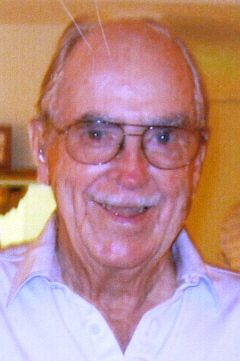 Richard was born July 26, 1915 in Chicago, Illinois, son of Frank and Holtie Olsen. Raised in Chicago, Richard moved to Glen Rock, New Jersey in 1954, and retired to Punta Gorda, Florida in 1986. He graduated from Carl Schurz High School in Chicago, and on September 17, 1938 Richard married Edna V. Johnson. He began his career as an engineer with the Kux Machine Company in 1946. In 1954 he moved with his family to Glen Rock, NJ, where he began a career as a successful salesman with Wickes Company, selling Die Casting Machines and Powder Metal Presses. In 1979 at the age of 64, he began a new career by setting up the company Richard M. Olsen, Inc., and becoming a sales representative for many companies allied to the Die Casting Industry.

Thru out his life he was involved in a variety of organizations, including Girl Scouts of America, B.P.O. Elks Lodge 2606, Punta Gorda, and Charlotte Harbor Yacht Club. In business he served the Society of Die Casting Engineers for over 40 years, many of them as Chairman of the New York Chapter. He was also active all his life in many capacities in the Lutheran Church, and was a member of Holy Trinity Lutheran Church in Port Charlotte, FL. Other life long interest included sailing, skiing, traveling and painting.

To leave a condolence, you can first sign into Facebook or fill out the below form with your name and email. [fbl_login_button redirect="https://robersonfh.com/obituary/richard-olsen/?modal=light-candle" hide_if_logged="" size="medium" type="login_with" show_face="true"]
×