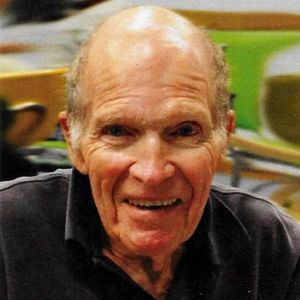 There will be a Mass of Christian Burial to Celebrate Bob’s Life at 1:00 PM Wednesday, May 27, 2015 at Sacred Heart Catholic Church in Punta Gorda.

Inurnment and Military honors will be held at a later date in Dearborn, MI.

Robert Oswald, 82, of Punta Gorda, Florida died on May 18, 2015 in Port Charlotte, FL. He was born in Detroit, Michigan on May 25, 1932. He graduated from Dearborn High School in 1950 and entered the U.S. Air Force during the Korean War. After the war, he returned home to study at the University of Michigan where he earned his Bachelor of Science in Engineering (Mathematics), Bachelor of Science in Engineering (Mechanical), Masters of Science in Engineering (Mechanical), and, in 1964, his Ph.D. in Nuclear Engineering. While studying in Ann Arbor, he met and married Judy Dick, his wife of 53 years. They have 2 children, Robert V. Oswald of Jersey City, NJ and Susan (Mike) Tremonti of Bloomfield Hills, MI and 3 incredible grandchildren, Nathan, Michael and Gabriella Tremonti.

Upon completion of his Ph.D., Bob accepted a research position with the Harry Diamond Laboratories in Washington, DC. With the exception of one year as a Visiting Professor at the University of Michigan (1969-1970), he spent all of his professional years in the DC area, living in Bethesda, MD. During his career he advanced from bench scientist to his last position as Director of Research and Development for the U.S. Army Corps of Engineers. His other assignments included Corporate Vice President, Science Applications International Corporation (SAIC); Technical Director, U.S. Army Electronic Research and Development Command; Assistant to the Deputy Director, Science and Technology for Theoretical Research, Defense Nuclear Agency; Associate Technical Director and Director, Nuclear Weapons Effects Divisions, Harry Diamond Laboratories.

Bob received many awards for his innovative and pioneering research which helped strengthen U.S. Strategic Missile Systems, improve the security of NATO’s Theater Nuclear Forces and develop technologies to deal with major environmental problems facing the Department of Defense, to name just a few. Some of his awards included the Presidential Distinguished Executive Award, the Presidential Meritorious Executive Award (twice), Secretary of Defense Meritorious Service Award, and U.S. Army Decoration for Exceptional Civilian Service. His outstanding professional work was also recognized when he was admitted as a member into the Cosmos Club of Washington, DC.

In addition to being a distinguished scientist and advocate for the U.S. military and the environment, Bob fought personal health battles. In 1987 he was diagnosed with Barrett’s esophagus, which would eventually lead to esophageal cancer, and at the same time learned he needed quadruple by-pass surgery. Eighteen months after successful heart surgery he underwent a second major operation for his esophageal cancer. He beat the odds and survived! Later, about 2002, he was diagnosed with Parkinson’s Disease, a condition he refused to let slow him down.

After Bob’s retirement in 1996, he and his wife, Judy, began to enjoy activities such as golf and sailing with more frequency. When at their summer home in Michigan on Torch Lake, they belonged to the Elk Rapids Golf Course where Bob served as a Board member for many years. His interest in protecting the environment never waned and he joined the Three Lakes Association (founded to preserve the environment in Northern Michigan). He became a Board member and, as Director of Water Quality, was a strong spokesperson for the purity of the area’s many lakes, working to protect them from E-Coli, invasive species and septic contamination.
Bob and Judy had begun to sail while they were in the DC area, thoroughly enjoying their time on the Chesapeake Bay with their sailboat, “Best of Times.” In 1996 they sailed her down the Intracoastal Waterway to their new home in Punta Gorda, FL. They continued to sail for several years, only reluctantly giving it up due to Bob’s Parkinson’s. They became members of St. Andrews South Golf course and Bob became an avid golfer. He also thoroughly enjoyed his weekly poker group and his “Sophist’s” breakfast discussions.

Several years ago he took up water color painting, an activity which brought him great pleasure. Cars were a life-long interest and he took special pride in his 2001 Jaguar convertible! Contributing to his Punta Gorda community, he volunteered at St. Vincent DePaul for several years and taught math at an alternative school. He was a member of the National Catholic Academy of Science and a Knight in the Equestrian Order of the Holy Sepulcher.
Bob and Judy could not have picked better communities…. They made friendships that will last forever!
Bob’s greatest joy in life was being around his grandchildren. He was so proud of their many accomplishments and nothing made him happier than when he was watching them play soccer or run competitively.

He will be greatly missed by his friends and family, including his brothers John (Elsa) and James (Arlene) Oswald; brothers in-law Doug (Eltress) and James (Mary) Dick; and many nieces and nephews. He was preceded in death by his parents Robert and Leona and his brother Jerome.
Last, but not least, Bob was a fanatically loyal alumnus of the University of Michigan. It wouldn’t surprise us if in the fall, “GO BLUE!” echoed down from the heavens!

There will be a Mass of Christian Burial to Celebrate Bob’s Life at 1:00 PM Wednesday, May 27, 2015 at Sacred Heart Catholic Church in Punta Gorda. Inurnment and Military honors will be held at a later date in Dearborn, MI. Memorial Contributions in lieu of flowers may be made to St. Vincent DePaul 2500 Airport Road Punta Gorda, FL. 33950 or The Michael J. Fox Foundation for Parkinson Research P.O. Box 5014 Hagerstown, MD 5014
Arrangements are by Roberson Funeral Home & Crematory Punta Gorda Chapel.

To leave a condolence, you can first sign into Facebook or fill out the below form with your name and email. [fbl_login_button redirect="https://robersonfh.com/obituary/robert-oswald/?modal=light-candle" hide_if_logged="" size="medium" type="login_with" show_face="true"]
×

There will be a Mass of Christian Burial to Celebrate Bob’s Life at 1:00 PM Wednesday, May 27, 2015 at Sacred Heart Catholic Church in Punta Gorda.

Inurnment and Military honors will be held at a later date in Dearborn, MI.