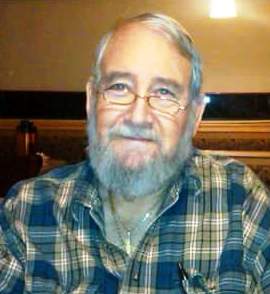 Ronald also known as Twiggy was born to Raymond and Captolia Porterfield on July 16, 1935 in Flushing, Michigan and moved to Punta Gorda in 2002 from Flint, MI. He was a Korean War veteran who served in the U.S. Navy. Ronald was a man who enjoyed life to the fullest. He was employed with GM Motors for 31 years before retiring to Florida. He loved animals and collecting guns and knives but mostly spending his time with family and friends.

Survivors include his son, Daniel R. Porterfield of Detroit, MI; his daughter, Michele McGrath and fiancé Stephen Fone, both of Punta Gorda; a sister, Yvonne McKinsey and family of Flushing, MI; 1 grandson, Tristan and many cousins.

A graveside service with military honors will be held at a later date at Sarasota National Cemetery in Sarasota, FL.

Friends may visit at www.robersonfh.com to sign the memory book and extend condolences to the family. Arrangements are by Roberson Funeral Home & Crematory Punta Gorda Chapel.

To leave a condolence, you can first sign into Facebook or fill out the below form with your name and email. [fbl_login_button redirect="https://robersonfh.com/obituary/ronald-r-porterfield/?modal=light-candle" hide_if_logged="" size="medium" type="login_with" show_face="true"]
×