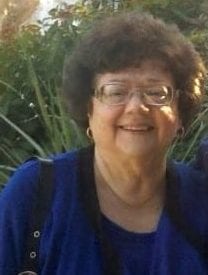 Sandra M. Valentino, 78, of North Port, Florida passed away Wednesday, November 18, 2020 with her children at her side.
Sandra was born to George and Aida Fanelli on July 22, 1942 in New York, NY, shortly following George’s return from service in WW2. Although the couple’s only child, she enjoyed the close childhood companionship of the many cousins in her large Italian-American clan. Relationships she would treasure throughout her lifetime. Sandra married her childhood sweetheart, Daniel Valentino in 1961. Before his passing in 2017, the couple shared 56 years of adventures, not the least of which was the raising of their 6 children. Dan and Sandy, as they were known to friends, were avid travelers and moved their large brood to Europe in the 1990’s, purchasing a hotel and restaurant in the Scottish Highlands. From oldest to youngest, the business was a full family effort. Upon returning to the United States, Dan and Sandy opened Donato’s Italian Restaurant in Port Charlotte. The restaurant will celebrate its 25th anniversary this coming April and was the beginning of a local success story that now employs over 200 people in five restaurants. A voracious reader, never more than an arm’s length away from a good book, Sandy leaves behind an impressive personal library and an equally impressive reputation as a font of general knowledge. The trivia partner dreams are made of. If her husband was a self-made business man, she was a self-taught scholar.
Sandy is survived by her two daughters, Susan MacDougall and Stacey Bullock; three sons, Daniel, David and Dennis Valentino; 13 grandchildren and 6 great grandchildren.
As a traditional Memorial Service is not feasible at this time, those wishing to pay their respects are encouraged to read a good book, try their hand at homemade pasta or plan their next travel adventure.
Friends may send cards to The Valentino Family, 19661 Cochran Blvd., Port Charlotte, Fl. or visit online at www.robersonfh.com to extend condolences to the family. Arrangements by Roberson Funeral Home & Crematory Port Charlotte Chapel.

To leave a condolence, you can first sign into Facebook or fill out the below form with your name and email. [fbl_login_button redirect="https://robersonfh.com/obituary/sandra-m-valentino/?modal=light-candle" hide_if_logged="" size="medium" type="login_with" show_face="true"]
×