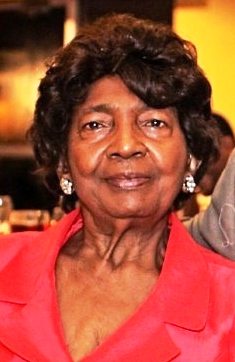 Violeta was born to Solomon and Theresa Prince on January 27, 1929 in Cuba. She was a member of St. James Episcopal Church for many years. Violeta grew up in Jamaica and later moved to New Jersey where she lived many years and later moved to Florida. She enjoyed life to the fullest especially traveling. She will be missed dearly by all who loved and knew her.

Survivors include her son, Dennis (Maxine) Young of Somerset, NJ; a step-daughter, Laverne (Robert) Sinkia; 2 grandchildren, Aston and Petrena and 1 great grandchild, Kendall; her niece, Laurice (Ray) Howell and many other nieces and nephews and cousins. She was preceded in death by her loving husband, John Smith.

Visitation will be held 10:00AM, Friday, September 22, 2017 with a funeral service to follow at 11:00AM at St. James Episcopal Church in Port Charlotte. Interment will follow to Restlawn Memorial Gardens in Port Charlotte.

Friends may visit www.robersonfh.com to extend condolences to the family. Arrangements are by Roberson Funeral Home Port Charlotte Chapel.

To leave a condolence, you can first sign into Facebook or fill out the below form with your name and email. [fbl_login_button redirect="https://robersonfh.com/obituary/violeta-smith/?modal=light-candle" hide_if_logged="" size="medium" type="login_with" show_face="true"]
×