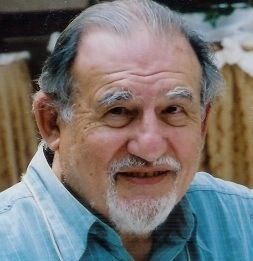 Anthony Salvatore DiGiovanna, 83, of Punta Gorda, Florida passed away at home Saturday, December 21, 2013, surrounded by his family after a four-year fight against Multiple Myeloma.

He was born on June 30, 1930, in Brooklyn, N.Y., the son of Anthony and Mary DiGiovanna. He grew up in Ridgewood, N.Y., with a love of the Brooklyn Dodgers, bowling and music, dabbling as a drummer in a jazz band. He graduated from Brooklyn Technical High School in 1948 and spent five years working at the New York Naval Shipyard. Anthony spent 39 years as a submarine designer and was active in youth sports and municipal agencies in East Lyme, Conn.

He was married to Jeanette Scheinberger, whom he called “The Love of My Life,” on July 8, 1956. Later that summer, he took a job as a draftsman with Electric Boat in Groton, Conn., where for almost four decades he designed the internal structures of submarines such as The Trident. He also designed the family’s six-bedroom, three-bathroom home on Monticello Drive in East Lyme. He spent 15 years on the East Lyme Parks and Recreation Department board and was instrumental in the building of a new Little League baseball complex and the playground equipment at McCook Point Park.

He was a charter member of the town’s Commission on Aging, he served on the town Building Committee and spent six years as treasurer of the Giants Neck Heights Beach Assn. A long-time youth baseball manager and coach, he was President of the East Lyme Babe Ruth League for two years and served as the secretary-treasurer of the American Bowling Congress in Southeastern Connecticut for six years.
In fact, he met his wife while bowling in a Naval Shipyard league, the beginning of a 52-year marriage “that any man in this world would be delighted to have,” he said. Jeanette, who passed away in 2008, spent 22 years as the town Tax Collector in East Lyme. He cherished the time he spent with his wife and kids, especially the skiing trips to Vermont, relaxing on the beach, trips to New York to visit relatives and a family vacation to Walt Disney World.

Upon his retirement from Electric Boat in 1994, he split time between Florida, where he played tennis, bridge and volunteered at the Cultural Center in Port Charlotte, and Newfane, Vt., where he delivered Meals on Wheels, enjoyed golf, crossword puzzles and reading murder-mystery novels on the back porch of the family cottage overlooking the Rock River. Among his favorite mantras: “Relax and enjoy it.”
He is survived by his sister, Annette, and her husband, Tony Pumo, of New Hyde Park, N.Y.; five children—Richard and his wife, Eileen, of Fairfax Station, Va., Paul and his wife, Kathryn, of Yorkville, Ill., Stephen and his wife, Sherry, of East Lyme, Conn., Mike and his wife, Susie, of Huntington Beach, Calif., and Jean Marie of Boulder, Colo.—and seven grandchildren, Joseph Paul, Michael Vincent, Joseph Reeves, Joshua King, Matthew James, Emily Marie and Connor Richard. Of all his achievements, he is “most proud of my family,” he said. “I’ve been blessed a million times over.”

Donations in his memory may be made to the Saint Michael Roman Catholic School; 48 Walnut St.; Brattleboro, VT 05301.
Friends may visit online at www.robersonfh.com to sign the memory book and extend condolences to the family. Arrangements by Roberson Funeral Home & Crematory Punta Gorda Chapel.

To leave a condolence, you can first sign into Facebook or fill out the below form with your name and email. [fbl_login_button redirect="https://robersonfh.com/obituary/anthony-digiovanna/?modal=light-candle" hide_if_logged="" size="medium" type="login_with" show_face="true"]
×