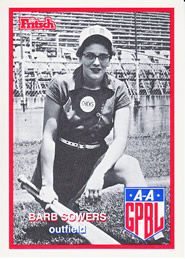 She was born May 4, 1932 in Detroit, Michigan to the late Carl and Luella (nee – LaRocque) Sowers. A career public educator and High School Counselor, Barbara moved with her longtime companion Shirley A. Weaver from their hometown of Livonia, Michigan, to Charlotte County in 1989 following her retirement. In her youth Barbara was a member of the All-American Girls Professional Baseball League during the 1953 and 1954 seasons. “Barb” began her Professional League career with the Muskegon Belles but played with the Grand Rapids Chicks in their 1953 season and Play-Off Champions title win. Barbara’s Professional Baseball career ended with the AGPB League’s demise at the close of the 1954 season. She was in every sense of the phrase, in a league of her own.

Barbara was preceded in death by her loving companion of 45 years, Shirley Ann Weaver in 2006, and is survived by numerous cousins, friends and special furry companion Gidgette.

Memorial contributions in lieu of flowers may be made to TideWell Hospice Inc., or the All-American Girls Professional Baseball League.

To leave a condolence, you can first sign into Facebook or fill out the below form with your name and email. [fbl_login_button redirect="https://robersonfh.com/obituary/barbara-sowers/?modal=light-candle" hide_if_logged="" size="medium" type="login_with" show_face="true"]
×