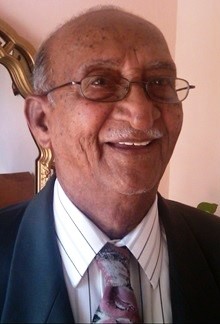 Carlyle was born May 8, 1919 in Trinidad, West Indies to the late Wilfred and Mabel (Edwards) Benn. He immigrated to the United States in 1971 to Brooklyn, N.Y. He moved to Port Charlotte from Miami, Florida in 1988. He was a retired Manager for a company who supported Oil fields sites in Trinidad W.I. and a member of St. James Episcopal Church of Port Charlotte.

He is survived by his loving family, three daughters, Joyce Popplewell and Joy Benn of Port Charlotte and Janet (Ulric) Francis of Fort Lauderdale, FL; four sons, Winston (Dionicia) Benn of England, Noel (Angela) Benn of Canada, Patrick (Fay) Benn of Fort Lauderdale, FL and Desmond (Cheryl) Benn of Port Charlotte FL; one and only sister, Dawn Brovelli of Port Charlotte FL; 21 grandchildren and 15 great grandchildren, uncle of many nieces and nephews. He was preceded in death by his wife of 65 years, Margaret Benn and a son, Leslie Benn, his brothers Andre and Vernon Benn.

To leave a condolence, you can first sign into Facebook or fill out the below form with your name and email. [fbl_login_button redirect="https://robersonfh.com/obituary/carlyle-m-benn/?modal=light-candle" hide_if_logged="" size="medium" type="login_with" show_face="true"]
×