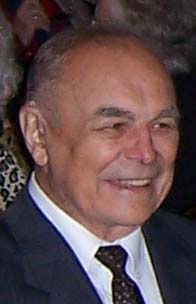 Donald was born January 6, 1925 in Beloit, Wisconsin to the late George and Mary (nee-Schaefer) Stemper. Answering World War II’s call to service, Donald joined the U. S. Army and served in Intelligence Operations. After military service, Donald graduated from the University of Wisconsin with a degree in Civil Engineering. Following graduation, he worked for the Creole Petroleum Corporation in Lagunillas, Venezuela. He returned stateside to work on various Engineering projects, including Boeing Company’s Minuteman missile systems for the U. S. Military. A former resident of Carmel, Indiana, Donald moved to Punta Gorda in 1997 with his wife Melba, and was a member of San Antonio Catholic Church in Port Charlotte.

To leave a condolence, you can first sign into Facebook or fill out the below form with your name and email. [fbl_login_button redirect="https://robersonfh.com/obituary/donald-stemper/?modal=light-candle" hide_if_logged="" size="medium" type="login_with" show_face="true"]
×