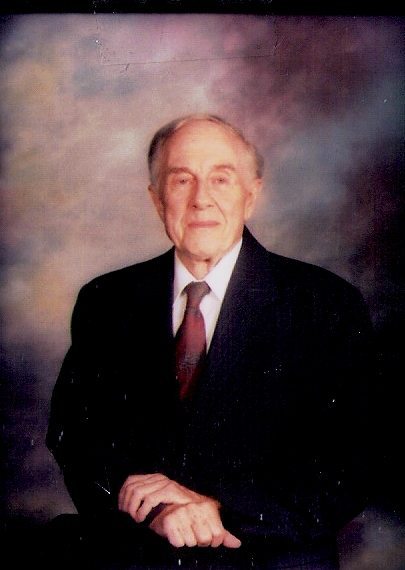 He was born in Bay City, Michigan and moved to St. Petersburg in 1986 and for the last couple of years has been residing in Punta Gorda. He lived a full and prosperous life, he was a man of honor, respect, pride and most importantly Christian Faith. John has left us with a rich legacy of being a most “good and faithful servant” not only to his country, but mainly to his Lord and maker.

John attended the University of Michigan and received a BS and MS degree in Mechanical Engineering. During World War II he served as a U.S. Naval Officer aboard an Attack Personnel Destroyer (APD-120) in the South Pacific. During his engineering career he worked in the Detroit Metropolitan area in plant and equipment design. He completed his career as an Operations Research Analyst for the U.S. Army Tank Command in Warren, Michigan. For eleven years he volunteered as a Score Counselor for the Small Business Administration in Michigan.

John married his wife Violet, whom preceded him in death and will be his eternal companion at his final resting place. His brother Martin Ittner of Traverse City, Michigan and his late spouse Louise Decker-Ittner of Pennsylvania have also preceded him in death. He is survived by numerous nephews and nieces.

Graveside services with military honors will be held Saturday 11:00 AM, June 11, 2016 at the Glen Eden Lutheran Memorial Park, Livonia, Michigan. Friends may visit online at www.robersonfh.com to extend condolences to the family. Arrangements by Roberson Funeral Home Punta Gorda Chapel.

To leave a condolence, you can first sign into Facebook or fill out the below form with your name and email. [fbl_login_button redirect="https://robersonfh.com/obituary/john-w-ittner/?modal=light-candle" hide_if_logged="" size="medium" type="login_with" show_face="true"]
×