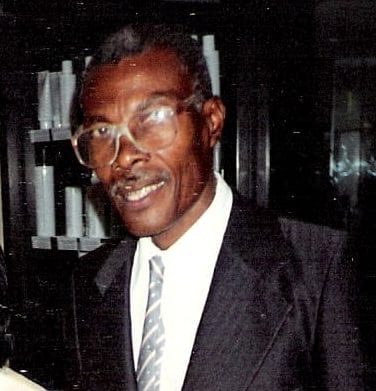 Joseph Jacques Guerrier, 85, of Port Charlotte, Florida died Friday May 15, 2020.
Joseph was born February 12, 1935 to the late Jules and Eugenia Guerrier in Croix Des Missions, Haiti. He moved to Port Charlotte in 1990 with his wife Ania, in 1990 from Brooklyn, New York. Joseph was a retired Evangelist and a founding member of the Bethanie French Seventh-Day Adventist Church of Port Charlotte, FL. Having emigrated from Haiti during the mid-60s, Joseph worked as an elevator operator and orderly, at Beth Israel Medical Center in New York City. He also became of member of a large union, Union 1199. He was very resourceful and instrumental in helping many of his friends in the Haitian community to obtain jobs in the industry. He also opened his home to many relatives who emigrated from Haiti, spending a few months while getting on their feet, and eventually branching out to self-sufficiency and making a decent living.  Joseph, affectionately remembered as “Papy” by his children, and “Papy Jacques” by his grandchildren, is fondly remembered for often bringing home French baguettes, avocados, sugar cane, mangos, cassava, and candy. He had a genuine love for people and would often open his home to friends who often praised the authentic and delicious culinary gifts of his wife, Ania. Joseph was proud of his native country of Haiti and often spoke of the hope of one day going back to live his final days there where he felt most at home. Joseph loved to read and was inspired by the Bible and writings of Ellen G. White, a key Seventh Day Adventist church pioneer. His most popular and frequent quote, his key defining message to everyone he could reach, was “Jesus is coming soon!”. While a member at Hebron, in Brooklyn, NY, he felt inspired which led to a calling to write and publish a series of pamphlets, which he translated into several different languages. His first pamphlet was titled, “Attention!”, followed by the subtitle, “A Final Appeal of Divine Grace on behalf of Humanity”. His passion for evangelism can be summed up in how he lived his life, doing everything in his power to spread the gospel of Jesus Christ and His Second Coming. He believed that a message of hope for all of humanity was embedded in scripture and the writings of Ellen G. White. Joseph’s pamphlets have been distributed across the globe, including but not limited to Asia, Europe, South America, Canada, the African continent, and the Caribbean.
After relocating to Port Charlotte, Florida during the early 90s, Joseph and Ania opened their home to help plant a local Seventh-Day-Adventist church, which was eventually named Bethanie, that catered to the growing Haitian population in Port Charlotte, Florida. Since that time, the founding members raised enough funds to build Bethanie French SDA from the ground up and has grown significantly to well over 200 members. Joseph and Ania were among the founding family members of the Hebron French Speaking SDA Church in Brooklyn, New York, the first Haitian Seventh Day Adventist church established in the United States.
He is survived by his loving family, his wife of 55 years, Ania Prevost Guerrier of Port Charlotte; his daughter, Rachelle Guerrier Louis of Orlando, FL; Francy Louis, son-in-law; his firstborn son, Wesley Guerrier of Baltimore, MD; and five grandchildren, Kaley Louis, Katelyn Louis, Jennifer Lian Guerrier Abbott, Jasmine Rachelle Guerrier, and Jessica Renae Guerrier. Beyond his immediate family, Joseph is survived by an extensive family that include siblings, cousins, nieces, and nephews. Families include but are not limited to the following bloodlines: Guerrier, Jean, Prevost, Gracia, Dadompre, Jules, and Louis. And finally, Joseph is survived by a sphere of influence that flows from his church family, his co-workers, his friends, and those who have been inspired by his life, his deeds, and his passion.
Visitation will be held Saturday 6-8 PM May 30, 2020 at Roberson Funeral Home, 2151 Tamiami Trail, Port Charlotte, FL 33948. Funeral services will be held Sunday, May 31, 2020 at 10:00 AM at the Bethanie French Seventh-Day Adventist Church, 23400 Harborview Rd., Port Charlotte, FL 33980. Entombment will follow at Restlawn Memorial Gardens in Port Charlotte.
Friends may visit online at www.robersonfh.com to extend condolences to the family. Arrangements by Roberson Funeral Home Port Charlotte Chapel.

To leave a condolence, you can first sign into Facebook or fill out the below form with your name and email. [fbl_login_button redirect="https://robersonfh.com/obituary/joseph-jacques-guerrier/?modal=light-candle" hide_if_logged="" size="medium" type="login_with" show_face="true"]
×