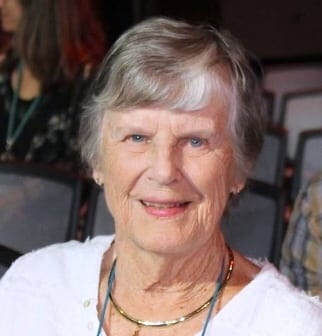 Inurnment will be held at a later date in Massachusetts by the family.

In lieu of flowers, memorial contributions may be made to Friends of the Mid-County Regional Library, 2050 Forrest Nelson Blvd. Port Charlotte, FL 33952.

Letty was born in Woonsocket, Rhode Island on July 6, 1934 to the late Lester and Christine Matteson. She spent her early years in Auburn, Maine before her family moved in the early 1940’s to Dennis, Massachusetts on Cape Cod. She was in the class of 1952 at Yarmouth High School and graduated from Katherine Gibbs Secretarial School in Boston in 1953. Letty was an executive secretary at Raytheon Corporation, where she met her husband Don, followed by employment at Vassar College, Poughkeepsie, NY, Campbell Realty, Concord, MA and finally as volunteer coordinator for Elder Services on Cape Cod. The family moved to Concord, MA in 1960 and spent 30 years there where they raised three children and met many life-long friends. In 1974 they built a summer home in East Dennis, Cape Cod, MA on Sesuit Neck, eventually retiring there in 1990. They enjoyed sailing out of Sesuit Harbor, making many enjoyable trips around the Cape & Islands. Letty and Don moved to Heritage Oak Park in Port Charlotte in 2003, where they greatly enjoyed their many friends and neighbors. Letty had been active in all social activities there, not wanting to miss any event. In her free time she enjoyed water aerobics, yoga and reading. Letty was an outgoing and friendly person who liked to talk to anyone she met. Her priority and passion revolved around her husband, children and many fine friends. She will be sorely missed by all of them.

She is survived by her loving family, her husband, Donald “Don” Jack Chapman; Daughters, Carolie (Peter) Owens of Concord, MA and Susan (Brad) Warren of Scituate, MA; a son, Brett (Julie) Chapman of Acton, MA; a brother, Kelvin Matteson of Port Charlotte; a cousin, Ann (Alan) Thomas-McKenzie of Indianapolis, IN; and six grandchildren.

A gathering of family and friends to celebrate her life will be held Saturday from 10:00AM to Noon, January 12, 2019 at the Heritage Oak Park Lodge, Port Charlotte. Letty will be buried in the family plot, next to the Dennis Union Church in Massachusetts where she and her husband were married 63 years ago.

In lieu of flowers memorial contributions may be made to Friends of the Mid-County Regional Library, 2050 Forrest Nelson Blvd., Port Charlotte, FL 33952

To leave a condolence, you can first sign into Facebook or fill out the below form with your name and email. [fbl_login_button redirect="https://robersonfh.com/obituary/letitia-letty-jane-chapman/?modal=light-candle" hide_if_logged="" size="medium" type="login_with" show_face="true"]
×

Inurnment will be held at a later date in Massachusetts by the family.

In lieu of flowers, memorial contributions may be made to Friends of the Mid-County Regional Library, 2050 Forrest Nelson Blvd. Port Charlotte, FL 33952.