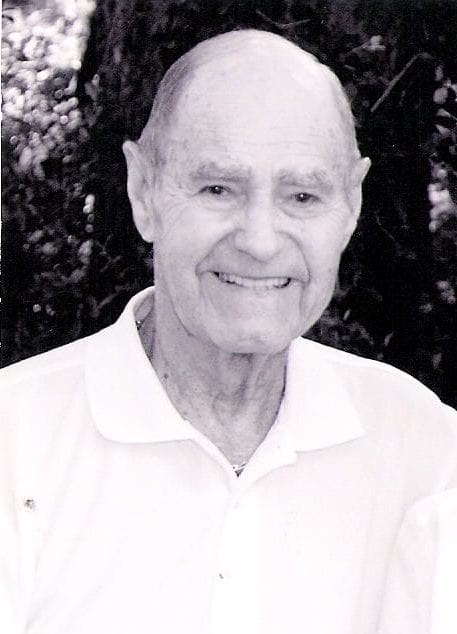 A Committal Service and Interment with Military Honors by the U.S. Navy will be held in the Spring of 2021.

A Private Family Memorial Service will be held at a later date.

Lorenzo (Larry) Gaudreau, 96, of North Port, Florida died Sunday, August 23, 2020 at Parkside Assisted Living and Memory Cottage in Port Charlotte, Florida.
Larry was born September 5, 1923 in Brunswick, Maine to the late Cedea and Clarence Gaudreau. On August 8, 1942, Larry was united in marriage to Rolande Elizabeth Pelletier. They shared 72 wonderful years together prior to her death in January, 2015. Larry was proud to have served his country during WWII as a member of the US Navy. For many years, Larry and his family owned and operated Gaudreau’s Market and the Hamburg House Restaurant in Lewiston, Maine. He also served as a Maine State Representative in the 102nd, 103rd and was serving in the 104th Maine Legislature when he joined the Maine Inland Fisheries and Wildlife Department. Larry was the head and creator of the Licensing Division in that Department and served as its Director until his retirement in 1983. In retirement, Larry and Rolande enjoyed many wonderful years with family and friends at their cottage on Sebago Lake in Maine and at their new home at “La Casa” in North Port, Florida. They both enjoyed sharing their time and talents with the “La Casa” community. Larry loved fishing, boating, puzzles, lobster, martinis and watching the Boston Red Sox. In retirement, his greatest passions were oil painting and tennis. His art work is cherished and proudly displayed in the homes of family and friends. Larry was an avid tennis player who loved to share his passion with beginners. He will always be remembered for his kind and gentle manner, strong work ethic, frugality and his compassionate spirit.
Larry is survived by his loving family; daughters, Therese (William) Slattery of Port Charlotte, FL, Diane (Robert) Kelly of Appleton, WI, Lorraine (John) Brennan of Windham, ME and son, Marc Gaudreau of North Port, FL. He is further survived by his grandchildren, Kathleen (Jarrett) Moore, John Scott (Tricia) Brennan, Elizabeth (Collin) Fowler, Brian (Megan) Kelly, Matthew Kelly and Adam (Kari) Kelly; his nine great-grandchildren, Keegan, Aiden, Nolan, Emma, Abigail, Alexander, Mason, Elin and Cavin; and one great, great-grandson, Jamison Brennan. Larry is also survived by one brother-in-law, Robert Pelletier and many nieces and nephews. He was preceded in death by his loving wife, Rolande, an infant son, Robert, his parents, and his siblings; Pete, Bob, Jerry, Isabelle and Jeanne.
The family would like to express our sincere thanks and gratitude to the caregivers at Lexington Manor, Parkside Assisted Living and Memory Cottage in Port Charlotte and Tidewell Hospice for their compassionate care.
Due to COVID concerns, a private family memorial service will be held at a later date. A committal service and internment with military honors by the US Navy will be held in the spring of 2021 at Maine Veterans Memorial Cemetery, Augusta, Maine with Deacon John Brennan officiating.
Larry will be deeply missed by his family and all those blessed to have known him.
Friends may visit online at www.roberson.com to extend condolences to the family. Arrangements by Roberson Funeral Home & Crematory Port Charlotte Chapel.

To leave a condolence, you can first sign into Facebook or fill out the below form with your name and email. [fbl_login_button redirect="https://robersonfh.com/obituary/lorenzo-gaudreau/?modal=light-candle" hide_if_logged="" size="medium" type="login_with" show_face="true"]
×

A Committal Service and Interment with Military Honors by the U.S. Navy will be held in the Spring of 2021.

A Private Family Memorial Service will be held at a later date.