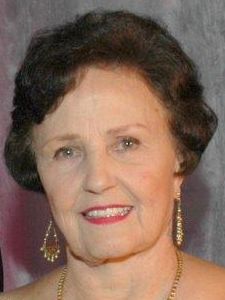 Interment will be in Laurel Grove Cemetery, Totowa, New Jersey in the Edmond Family Burial Estate.

She was born May 15, 1926, in Hawthorne, New Jersey to Mr. and Mrs. Thomas J. Edmond, she is predeceased by her husband of 40 years, William H. Hess in 1988, her mother and father and her two brothers, Thomas R. Edmond, and Harry J. Edmond. She is survived by her brother William A. Edmond, daughter Evan Comella and three grandchildren.

Educated in New Jersey, Paula was employed by New Jersey Bell and Telegraph Company in a first level management position in the Paterson, New Jersey business office. She was a professional horsewoman, instructing and training in English equitation and horsemanship.

The Hess’s built their first Florida home in PGI in 1976 and became Charter Members of the Isles Yacht Club. Retired to Florida in 1981, Paula became active in civic affairs. She was a member of the founding C.A.R.E. Board; was Chairman for three terms and remained with a permanent directorship as Chairman Emeritus until her death. She served the League of Women Voters as Voter Education Chair conducting Candidates Forums from 1985 to 2009. She served the City of Punta Gorda on the Park Study Committee, the Council for Intergovernmental Relations and the CRA as a commissioner for 10 years. She was a member of several Charlotte County Charter Review Commissions, Chairman in 1996, and was Chairman of the Charlotte County Planning & Zoning Board from 1987 to 2018. She was also a Trustee of Charlotte Regional Hospital, Vice Chairman for two terms. Paula was awarded the Charlotte County Chamber Pacesetter Award in 1997 in recognition of community service and achievement.

In lieu of flowers, memorial contributions may be made to C.A.R.E., PO Box 510234, Punta Gorda, Florida 33951-0234. Friends may visit at www.robersonfh.com to extend condolences. Arrangements by Roberson Funeral Home & Crematory Punta Gorda Chapel.

To leave a condolence, you can first sign into Facebook or fill out the below form with your name and email. [fbl_login_button redirect="https://robersonfh.com/obituary/paula-edmond-hess/?modal=light-candle" hide_if_logged="" size="medium" type="login_with" show_face="true"]
×

Interment will be in Laurel Grove Cemetery, Totowa, New Jersey in the Edmond Family Burial Estate.