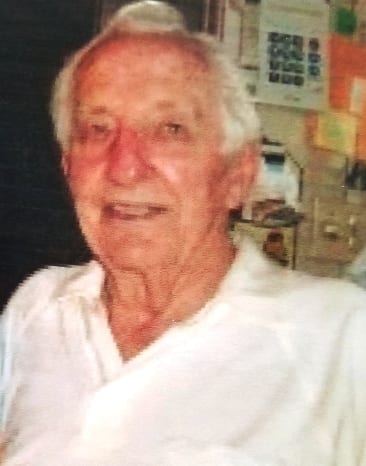 Interment will be held at a later date in St. Mary Catholic Cemetery in Evergreen Park, IL.

Robert Raymond Kirschbaum, 98, of Punta Gorda, Florida died Saturday, February 6, 2021 at Bayfront Health-Punta Gorda.
Robert was born March 14, 1922 in Chicago, Illinois to the late Raymond Joseph and Helen (Richelsen) Kirschbaum. He was a load dispatcher for Commwealth-Edison in Chicago and a U.S. Army Air Corps veteran of World War II. Robert moved to Windmill Village in Punta Gorda In 1983 when he retired. During his retirement years he was a volunteer driver for the American Cancer Society and received recognition for his many hours of driving cancer patients to and from their treatments.
Survived by his loving family two sons, Lawrence “Larry” A. Kirschbaum of Elkhart, IN and Howard R. Kirschbaum of Magnolia, TX; a sister, Dorothy Demeteral of Frankfort, IL; his companion and friend, Effie Lehmbeck of Punta Gorda; two grandchildren and three great grandchildren. He was preceded in death by his wife, Jeannette E. Kirschbaum who died in 1994.
Interment will be held at a later date in St. Mary Catholic Cemetery, Evergreen Park, IL where he will be laid to rest with his wife, Jeannette. Memorial contributions may be made to the American Cancer Society www.cancer.org
Friends may visit online at www.robersonfh.com to extend condolences to the family. Arrangements by Roberson Funeral Home & Crematory Port Charlotte Chapel.

To leave a condolence, you can first sign into Facebook or fill out the below form with your name and email. [fbl_login_button redirect="https://robersonfh.com/obituary/robert-raymond-kirschbaum/?modal=light-candle" hide_if_logged="" size="medium" type="login_with" show_face="true"]
×

Interment will be held at a later date in St. Mary Catholic Cemetery in Evergreen Park, IL.