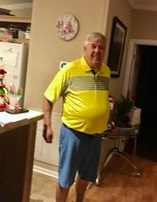 Bob was many things to many people. As a son, brother, father, husband, coworker and friend he was able to touch many lives. He could always find a way to reach people and connect with them.  With a great sense of humor, he was always equipped with a joke.  Both charming and genuine, he never met a stranger. It’s considered a good life when as one enters the world he cries and the world rejoices, but when he passes the world cries and he rejoices. Though cliché, this is the impact Bob has had on the people who knew him. He is beloved and will be sorely missed.

He is survived by his loving wife of 28 years, Rita Ward. Bob lives on in son, Derek Ward, and two grandsons, Robert and Jeffrey Ward. He is also remembered by his extended family Scott Nangle and his sons, Gage and Scotty as well as John Baker and his two daughters, Dominique and Cheyenne.

To leave a condolence, you can first sign into Facebook or fill out the below form with your name and email. [fbl_login_button redirect="https://robersonfh.com/obituary/robert-t-ward-jr/?modal=light-candle" hide_if_logged="" size="medium" type="login_with" show_face="true"]
×