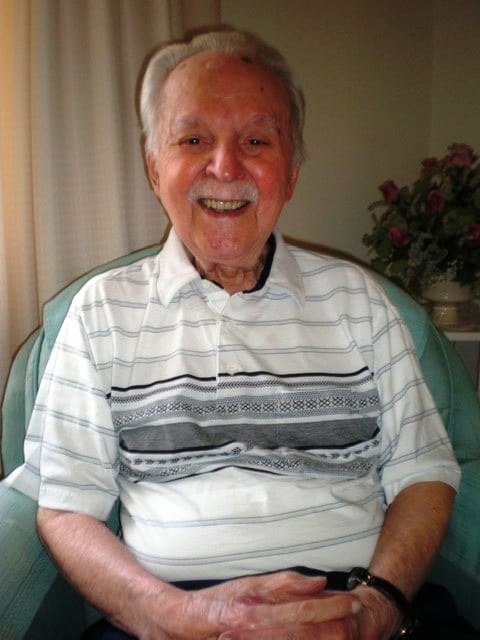 Thomas “Tom” Ligotti, 105, of Port Charlotte, FL, died Monday, November 16, 2020. He was born on August 19, 1915 in Buffalo, NY, son of the late Theresa and Giusieppe Ligotti.
Tom was a WWII veteran who served his country honorably, in active service from 1942-1945 and the Army Reserves from 1946-1949. He participated in the European Campaign and was a member of the 70th Engineers. He received campaign stars for his participation in the Battle of the Bulge, the Normandy Invasion and the Roer & Rhine River crossings. Members of his company received certificates from the French government for the liberation of Normandy. Tom remained in Buffalo until 1938 when he moved to Wingdale, NY. It was there that he met his wife, Antoinette. They were married in NYC in 1942 and were happily married for 70 years. In 1949, he and his family moved to Hawthorne, NY, where he continued his education, graduating from Pace University with a B.B.A degree in Accounting. He was a corporate accountant for GPL/ Singer Co. for twenty years and the New York Medical College. Two of his most prized possessions, are the Jesse Ketchum and Sons of the American Revolution medals, received for academic excellence while in school in Buffalo, NY. Tom had a beautiful singing voice. He loved opera and wrote many songs and poems. He was involved in community theatre with his wife for over 20 years and was a choir member of Holy Rosary Catholic Church in NY. During their retirement, he and his wife volunteered at Blythedale Children’s Hospital in Valhalla, NY. They remained in Hawthorne until 2000 when they moved to Southport Square in Port Charlotte, FL. They continued their volunteer work at the Peace River Elementary School in Port Charlotte. He and his wife were members of the San Antonio Church in Port Charlotte, FL. Tom lived his life with integrity and was beloved by all those who knew him.
Tom was preceded in death by his wife Antoinette, brothers Anthony and Louis and sister Angeline.  He is survived by his sister Josephine “Babe” LeClair; two daughters, Carol Ann Lugari of Port Charlotte, FL and Deborah Polson (Tom) of Louisville, KY;  four grand-children, Robert Lugari of Los Angeles, CA, Pamela Dubas (Oliver) of Poughkeepsie, NY, Heather Castrone (Bob) of Sierra Madre, CA, Michael Cyr (Julie) of NYC, NY; five great grand-children, Ashley Nesheiwat (Mark) and Ryan Keefe both of Poughkeepsie, NY, Dean Castrone and Nicolas Castrone both of Sierra Madre, CA and his namesake Austin Thomas Cyr of NYC; a great-great-grand-daughter Annabelle Nesheiwat, great-great grandsons Gabriel,Noah and Abel Nesheiwat of Poughkeepsie, NY and many nieces and nephews. He is also survived by brother-in-law Richard Coccaro, sister-in-law Lorraine Coccaro and sister-in-law Gloria Sanchez.
A Memorial Mass celebrating Tom’s life will be held Wednesday 11:00 AM Nov. 25, 2020 at San Antonio Catholic Church, 24445 Rampart Blvd., Port Charlotte, Florida 33980. Interment will be in the San Antonio Catholic church Memorial Garden.
Memorial contributions in lieu of flowers may be made to a favorite veteran’s organization.
Friends may visit online at www.robersonfh.com to extend condolences to the family. Arrangements by Roberson Funeral Home & Crematory Port Charlotte Chapel.

To leave a condolence, you can first sign into Facebook or fill out the below form with your name and email. [fbl_login_button redirect="https://robersonfh.com/obituary/thomas-v-ligotti/?modal=light-candle" hide_if_logged="" size="medium" type="login_with" show_face="true"]
×