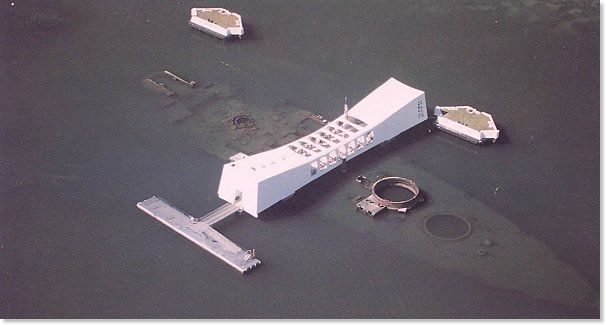 Vernon was born in Rockford, Illinois on March 1, 1920, the youngest of 14 children born to Oscar and Frances Olsen of Rockford. Vernon enlisted in the United States Navy on October 8, 1940. After completing basic training at the Great Lakes Naval Station in Illinois, Vernon was assigned to the USS Arizona (BB-39) as a seaman. On December 7, 1941, Vern was assigned to mess duty for 5th Division when general quarters was sounded. His battle station was located in the gun tubs on the after mast, where he was to man a 50-caliber water-cooled machine gun. He did not have access to the keys to the ready-locker, therefore he did not have any ammunition or water needed to operate the machine gun. A Japanese plane flew between the masts and dropped a bomb. Following the explosion of the bomb, he was ordered to abandon ship. As he was escaping, he received severe burns to his arms. Another, much larger explosion occurred and the ship became an inferno. Vern found himselft floundering in the harbor’s water but was soon rescued and transported safely to Ford Island. He was later assigned to the USS Lexington (CV-2) and survived the sinking of that carrier during the Battle of Coral Sea. He was then assigned to the USS Nassau (CVE-16) and participated in many naval engagements in the Pacific. After the war, Vernon was assigned to the USS Fulton (AS-11) and participated in the atomic testing at Bikini Atoll in July of 1946. On December 9, 1946, Vernon received his honorable discharge from the Navy with the rank of Electrician’s Mate First Class (Acting Chief).

While the Nassau was under repair at the Mare Island Navy Yard in California, Vern took leave to marry Jo Ann Castelles of Rockford, Illinois on April 8, 1944. Shortly after his discharge from the Navy, Vernon went to work for the Commonwealth Edison Company in Rockford. He was in charge of distributing electrical power throughout the Rockford metropolitan area. Vern retired in 1975 after 28 and one half years of service and he and Jo Ann moved to Port Charlotte.

He leaves behind his wife of 67 years, Jo Ann Olsen, and numerous nieces, nephews, and extended family members.

The cremated remains of Vernon will be interred on his ship, the USS Arizona, during a sunset ceremony on Wednesday, December 7th, 2011. Arrangements are by Roberson Funeral Homes & Crematory Port Charlotte Chapel.

To leave a condolence, you can first sign into Facebook or fill out the below form with your name and email. [fbl_login_button redirect="https://robersonfh.com/obituary/vernon-olsen/?modal=light-candle" hide_if_logged="" size="medium" type="login_with" show_face="true"]
×