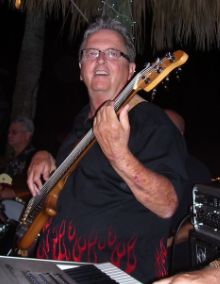 He was born April 28, 1948 in Geneva, New York to the late Albert William and Alma Eldora Hill. William moved to Port Charlotte 17 years ago from San Bernardino, California. He was a retired Master Sergeant, United States Air Force and a veteran of the Viet Nam War. He was a member of the First Alliance Church, American Legion Post #103, and Disabled American Veterans Chapter #82, all of Port Charlotte and the Blinded Veterans Association.

Survived by his loving family, wife, Sarah S. Olvera-Hill of Port Charlotte; a daughter, Marcia Roadifer of Fulshear, TX; a son, William D. Hill of Mountain Home, Arkansas; a step-son, Abel Viamontes of Miami, FL; two sisters, Mary Jane DeGuilio of Sarasota, FL and Judith Van Houten of Geneva, NY; a brother, Edward Hill of Denmark; and 2 grandchildren. He was preceded in death by his first wife, Susan J. Hill who died in 2007.

Visitation will be held Wednesday from 6:00 PM to 8:00 PM, Oct. 8, 2014 at the funeral home. Funeral services will be held Thursday 11:00 AM, Oct. 9, 2014 at Roberson Funeral Home Port Charlotte Chapel. Rev. Robert W. Stegeman will officiate with military honors by the U.S. Air Force. Interment will be held at a later in Woodlawn Cemetery, Canandaigua, New York.

Memorial contributions may be made to the American Diabetes Association www.diabetes.org

To leave a condolence, you can first sign into Facebook or fill out the below form with your name and email. [fbl_login_button redirect="https://robersonfh.com/obituary/william-hill/?modal=light-candle" hide_if_logged="" size="medium" type="login_with" show_face="true"]
×